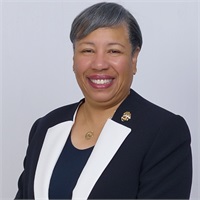 Angie Ribuffo was born in Augusta Georgia, the child of a military family. She traveled a lot while growing up and lived in Germany and Thailand. She graduated from high school at 16 and went on to graduate from San Francisco State University, SFSU, with a bachelor’s degree in nursing and a minor in theater arts and was commissioned through the Air Force ROTC program where she was the first female distinguished graduate at SFSU. While in the Air Force she obtained the rank of captain and was an Air Force flight nurse.

After her time in the Air Force, she went on to teach at Antelope Valley College and City Colleges of Chicago until the Air Force moved them to Germany. While stationed there, during Desert Shield/Desert Storm, she was the point person for all family assistance for the hundreds of military families at Spangdahlem, Germany.

In 2007, after 30 years in the Air Force her husband, Steve, retired and they moved back to Anchorage where they had been stationed years before.

In March of 2019 Angie was recognized by InvestmentNews as one of the 2018 Women to Watch and was also inducted into the Anchorage Athena Society.

The Investment News Women to Watch award is based upon the nominee’s demonstrated success and leadership in the financial advisory industry, proven ability or power to effect change in the industry, willingness to share her expertise with others in the field, including by serving as a mentor and given back to her community through such activities as sitting on boards, volunteering and donating time to help investors.  Award recipients cannot self-nominate and do not pay a fee to receive or promote the award which is independently bestowed and membership in a specific group is not required.

Nominations for Anchorage ATHENA Society members are solicited from the community at large. Inductees are selected based on the recognition of their outstanding leadership and excellence in their business or profession, their community service outside of job requirements and that they are known for assisting women to reach their full leadership potential. Inductees cannot self-nominate and do not pay a fee to receive or promote this recognition which is independently bestowed and membership in a specific group is not required.

The WIFS Circle of Excellence award is an independent listing produced by Women in Financial Services and recognizes WIFS members who achieve significant income levels in the insurance and financial services industry. This recognition is based on annual production for the previous year, which is submitted by individual members   Angie Ribuffo applied for this award and annual national membership fee of $260.00 is paid to WIFS.   No fees were paid for the receipt or promotion of this recognition which was independently granted.

The WIFS Angel Award is given to a member of the WIFS who has demonstrated attributes that have been instrumental to the success of peers. Recipients cannot self-nominate or apply for this recognition and no fees were paid for the receipt or promotion of this award which was independently bestowed.

Angie is married to her husband of 39 years, Steve, has 2 adult sons, Stephen and Daniel, a 8 year old granddaughter, Tahli and 5year old grandson, Malcolm and her golden retriever, Abby.

Her key to success: be honest, be fair, and be authentic.